I received my round 2 block with one border today from Kathleen!
It is lovely!
I need to put my thinking cap on to do something that will hold up against that first border!
I am excited!
Posted by roccagal at 4:02 PM No comments:

Many of you have mailed off your "center with one border" already, and some of you have received the next project to work on.

For the next round, which has a due date of April 25, I'd appreciate it if you would hold onto your "block with two borders" and not mail it until at least April 10.   This way we'll avoid having things stack up and won't put pressure on those who are working more slowly  (like me!)

If you're worried about not remembering where you stashed the project when it comes time to mail it out, you can post here about where you put it.  For me, blocks and other things that need to be mailed at some point always go on the bookshelf on top of the loose quilting stuff I've printed out but not yet filed...

Off to the next stop

Mailed off my package to Julie, yesterday.......yes, yesterday.  Mine was a no brainer.  And I won't even show you what I did because you will know it immediately!

LOL.  So you just have to wait!

glenda
Posted by Glen QuiltSwissy at 4:57 PM No comments: 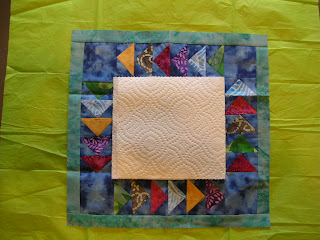 Given the theme of the center block, I added some Flying Geese in bright Batiks and sent the little block on its way. I've attached a picture (suitably doctored with a folded paper towel - way low tech!) of the Geese and the very narrow border I put on for stablilzing the edge. I thought it was just too much to ask that the next "Border Patrol" to deal with the very narrow seam allowance I had left AND the awkwardly loose thread joins... so a narrow border seemed like a good solution, and I calculated the extra width into the total allowed for the first border. Should be arriving next week... hope it isn't too early!

Wednesday I received my next Cotton Robin installment: (the "Block With One Border") in the mail. Bright "Modern" colors are not my usual style, but I do have some Kafe Fassett dots that may do nicely for the second border. I'll have to think on it.

This is so much fun! Thanks Julie.
Nan in Oregon
Posted by Librarynan at 4:29 PM 1 comment:

A quick question on wool batting. Has anyone used either Quilter's Dream Wool Batting or Hobbs Wool Batting? If so, which one do you prefer? I'm taking a machine quilting workshop with Jill Schumacher and she suggests using one of those two. I have yet to gather all the supplies and I'm leaving the batting for last.

By the way, I received the 1st border ... still need to mail off my 1st border. Will post doctored pictures when I'm ready to send it off.
Posted by Tami @ Lemon Tree Tales at 4:28 PM 1 comment:

I had a good time with this border for several reasons, and I learned some things about myself too.


Here's a photo - the center and the colors have been altered, so I'm not giving anything away. 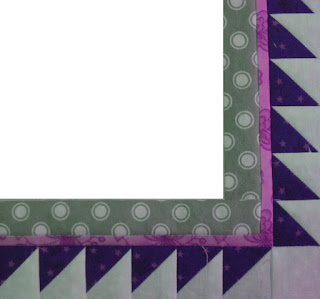 I'll put this into the mail this week. Mail has been pretty slow to/from New Zealand lately, so I want to make sure it arrives on time (a subtle hint to whoever is sending a block to me for the next border).

Has everyone received their center block to work on?  I should have been taking notes but I haven't... If you HAVEN'T received your block, please let me know!

- center block should be mailed and received by the next quilter no later than February 28, 2019. Please send Laurina a photo of the center block before mailing (via email, not to the blog)

- center-with-one-border should be mailed and received by the next quilter no later than April 4, 2019.

- center-with-two-borders should be mailed and received by the next quilter no later than May 9, 2019.

- finished quilts can be mailed to their owners whenever you wish, but received no later than June 13, 2019. Please send Laurina a photo of the finished quilt before mailing (via email, not to the blog)

Please post to the blog when you send or receive a package.